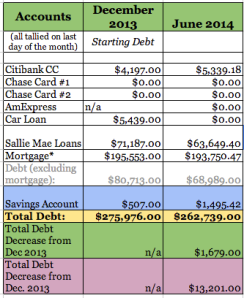 This month has flown by! School was out during the second week, and the third week I worked at a camp, and then we traveled to visit family (and still came under on our gas budget, because H isn’t driving two hours a day to work this month!).

We have changed our goal from snowflaking all of our extra money to the Citibank card to building our travel fund for next summer’s trip to France for H’s conference. I’m planning to build the fund to $5,000 because I’d rather have more money saved than not enough…. However, we made this decision in the middle of the month, so we still snowflaked $125 (H earned it from a side hustle gig) to the Citibank card early in the month.

At some point, I realized that I was paid more in my May paycheck from my regular job. Sometimes that happens because it has something to do with how much they take out for social security, retirement, etc. at the end of the year. I took that money ($355) and put it into our travel fund!

Since I have this interview, I can’t help but plan for how our lives would change if I were offered the job. Moving, getting L registered at a new school for kindergarten, trying to sell our house, trying to find a rental, uuuuuuggggghhhhhhhhh…. and finding out about life changes in late July are no good for people who work on the August-June school year. There isn’t much I can control at this point (other than preparing to kick ass at the interview, which I will try my hardest to do), but it makes me feel better to know that I can at least set some money aside to help defray the costs that will crop up along the way. I added new categories in our savings account spreadsheet. Now – in addition to our sinking fund categories – the spreadsheet includes “Travel Fund,” “Emergency Fund,” and “Moving Fund.” Just in case.

Life (as in, Non-Monetary) Accomplishments this Month:

What I’m Looking Forward to in July:

Verdict: Working on it. We’ve gone back to paying a flat payment of $525 monthly, which will get the balance paid off in time to avoid any interest penalty. We were going to snowflake all of our payments to this account, but we decided to put all of our extra money to saving in our Travel Fund.

Verdict: SUCCESS! This was completed in May 2014. Need to modify this goal!

Verdict: Yes. We’re thankfully going to be in the black on every category except for one when the automatic transfer happens in July.

Verdict: I need to modify this goal, since we’re going to work on building our Travel Fund and Emergency Fund.

Verdict: Yes. It really helps to have this blog! When I’m feeling down about finances, I can remind myself that we’ve paid off over $13k since January 2014. Woohoo!

I’m considering sharing my actual budget with you next month. That’s putting a lot of financial information out there, and I wasn’t sure I wanted to do that. A lot of PF bloggers put their budgets out there and then what they actually spent, and that is always intriguing to me. I also feel like maybe it would give more structure to these posts. What do you think?

Also,  I obviously need to revisit our goals! They can be new goals for the second half of the year. Just add it to my to-do list….

P.S. What do you think of my new blog layout? I think I like it better, overall. Opinions welcomed!

Half the year is basically over! On June 24, my mom said, “Do you know, in six months it will be Christmas eve?” CRAZY.

A few items of note from the past 6 months:

– I got a side hustle, which has helped me bring in more moolah!
– We paid off the Citibank credit card (all consumer debt)
– We moved our high-interest student loan to the Citibank card and are on track to pay it off in 10 months (with 0% interest)
– We paid off our car loan!
– We’ve been paying down debt for 6 months now, and we’ve paid off more than $11k!
– Our house has gone up in value (?!)
– I applied to a paying gig just for teachers in my state, and I was accepted!
– I landed an interview for Awesome Job! (More info below!)

This month (and July & August) are all different from our regular school-year months. I’m a 10-month employee, which, in my position, means I get paid only 10 times a year. That isn’t the case with all state jobs, just apparently K-12 teachers. Yes. Anyway. I use our Credit Union to save $400 a month during those ten months and then I have $4k to use for the two months I don’t get paid. The CU just gives it to me at the end of June and then at the end of July. It’s lower than my normal paycheck during the school year, but I have justified that by saying that our daycare costs are nil during those two months, so it all evens out. I guess I should look into changing it up next year, since it will seem like a more drastic change over the summer without the daycare costs coming out each month.

In any case, I’m still bringing in money from my side hustle, so I took the step of actually incorporating it into my budget this month.

What I actually did on pay day at the end of May was this:

In Mint, I changed the date for my side hustle paycheck to the first of June (instead of the end of May). Then I added the amount I knew we were getting from our regular jobs (that would be coming in at the end of June). That way I knew exactly (well, more or less!) how much we had for the month. I don’t know how helpful this was, as I still allocate the side hustle funds to savings & debt eradication and I decidedly do not want it to be used for living expenses or other such things.

Have you heard of You Need a Budget? I don’t use it because I haven’t felt the need to Need Their Budget (because I use Mint.com and I love it), but there’s a principle they encourage their users to follow: living on last month’s income. Technically, we do that already. We get our paychecks direct-deposited into our checking account at the end of the month, and we know exactly what we have to spend for the following month. However, I think that really what they’re saying is to have a month’s worth of expenses in your checking account. I guess if you get paid twice a month, the “live on last month’s money” concept makes a lot more sense – but we always know exactly what we have to spend in our checking account.

On the whole, though, it would be great to have that kind of cushion. It would be like an emergency fund, and that would be freaking awesome.

In other news, and as stated above, I landed an interview for Awesome Job! I didn’t think it was actually going to happen because it took them so long to call me, but I have the interview next month. I was asked to give a presentation relating to the position, and I’ve been combing the internet for information to fill in the gaps in my knowledge. I’ve been in touch with five people who I consider knowledgable in the field, and I’ve already spoken with three of them. I’m scheduled to speak with two others (one today!). I also am going to schedule a time to speak with another person who has responded to my request. It’s a lot of time and work, but I’ve gotten more confidence and feel like I’m really getting the information I need!

We’ll see what happens. I’m happy to stay on in my current position – it’s a lot of work because I have my side hustle and this other great teacher gig on the side, and that’s a lot to be juggling in addition to a family and taking better care of my health (no worries, just want to be healthier, which requires time to exercise and plan meals). The Awesome Job would be a lot of work, too, but it seems like it would be concentrated in one job (instead of basically three) for about the same kind of money. So, there’s that.

I’ll be updating with an end-of-the-month recap as usual soon!

Just wanted to, you know, shout it from the rooftops one more time…. We paid off our car loan! And we have the title to prove it!

We paid the minimum payment of $172 each month for about a year, then began a more focused repayment. We didn’t really make a huge dent, though, until February 2014, and from then on, we snowflaked every little amount of money we could so that we could own it.

Our mission? Not to owe any money on it when it breaks down again or needs to be replaced.

Now, on to all of the other debts and savings we have on our list….